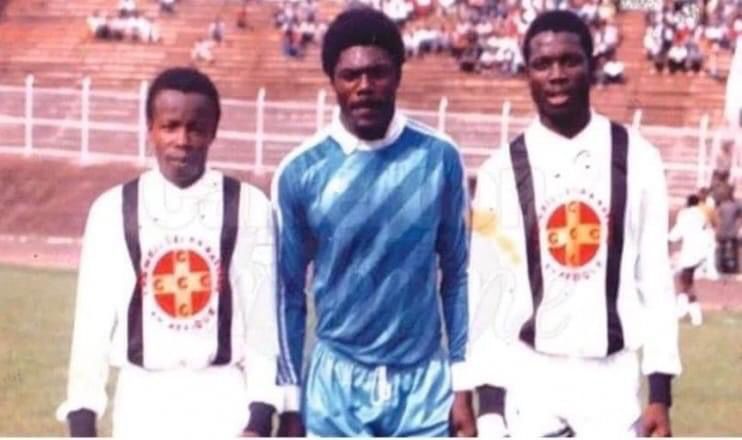 When I landed in Cameroon, I kept asking random people, who’s the Ghanaian footballer they know. The answers were quite surprising.

Well, Abbrey is a Ghana football legend you may not know.

A lot of middle-aged football fanatics in Cameroon are so fond of Abbrey and sometimes in Taxis, shops etc, after introducing myself as a Ghanaian, the first name that comes out in response, is not Abedi Pele, Asamoah Gyan or Michael Essien. It’s Kofi Abbrey.

Abbrey aka ‘Shine the Body’ was one of the most popular and skilful players in the early 1970s to early 90s. He was short, diminutive and a beast of speedster on the wings.

It’s said a lot of fullbacks dreaded the idea of facing Abbrey as he could torment the toughest of defenders to succumb.

But why’s he so popular in Yaounde?

Circa 1987, Abbrey was one of the hottest football commodities on the African scene. He had helped Ghana win the African Cup in 1982 playing all 5 games. His value had skyrocketed. He was then playing for Western giants Sekondi Hasaacas.

Abbrey’s name will explode on the continent again when in 1987, he helped Asante Kotoko come from a goal down to beat Zamalek 5-1 in Kumasi.

Three of the goals were from his corner kicks. That day, a new song was made for him that goes; “Abbrey corner 3y3 goal” to wit, Abbrey’s corner is a goal.

After that African Cup campaign, a delegation from Cameroon arrived in Accra to speak to Abbrey. They were from Caneroon’s top club Tonnere Yaounde. They wanted to secure Abbey’s signature in a lucrative deal.

He agreed and signed the deal. Abbey was given apartment in Yaounde and good amount of money for the move.

Tonnere was then supported by Cameroon President Paul Biya who had taken over and they had great leadership under Eboude.

The idea was to put together some of the best players in Africa in the team reason they came for Abbrey from Ghana. They also brought in Japhet Ndora from Chad and signed the legendary Geroge Weah.

Weah had been top scorer of the Liberian League and was on his way to Africa Sports of Ivory Coast but two days after he landed in Abidjan, Tonnere sent a delegation to whisk him away to Yaounde.

And there in Yaounde, George Weah and Kofi Abbrey shared an apartment.

That Tonnere Yaounde team was the greatest in their history winning five championships. Abbrey was responsible for a large number of goals scored by George Weah as they formed a deadly partnership.

Claude Leroy then coaching Cameroon, recommended Weah to his friend Arsene Wenger back in France.

The recommendation was so high that, Wenger, then coach of Monaco, personally flew down to Yaounde to see George Weah for himself and took him to France for €12,000.

And that is how Weah’s life will change forever.

Today, Abbrey, is sick and bedridden in Sekondi, and may not know how he’s so much adored on the streets of Cameroon.

In 2020, Abbrey in a radio interview, pleaded to get the contact of George Weah, who had been sworn in as Liberia President.

And if His Excellency George Weah ever reads this, his friend attacking partner at Tonnere, Kofi Abbrey, says hi.