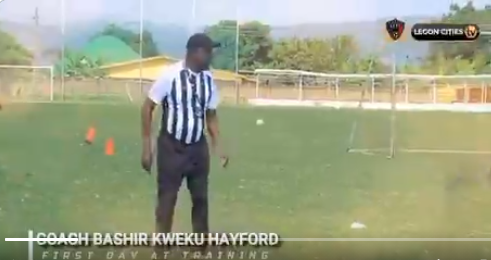 New Legon Cities coach Bashir Hayford started work with his charges on Monday at the club’s training base.

He replaces Bosnian coach Goran Barjaktarević who was sacked after just two games in the ongoing season.

The ambitious Ghana Premier League side massively fortified their team with about 13 new signings but results was very difficult to come by for the team.

In three matches this season they got just two points and lost heavily to Great Olympics forcing the hand of the club’s hierarchy to sack the under performing Bosnian manager.

During their last game which was supervised by stand in Coach Wahid, they also drew with Medeama.

After a two year hiatus in the local game experienced Bashiru Hayford has made a returning to a league has won twice with two different clubs that is Kotoko and Ashantigold.

The experienced trainer went on an adventure in war torn Somalia where he managed their senior national team briefly.

The experienced trainer has in the past coach Asante Kotoko, Power FC, Ashantigold among others.

With his appointment, many media men  will be salivating as he always leaves an impression during pressers.