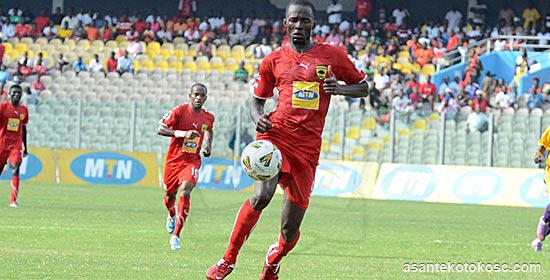 After nearly three year injury enforced hiatus from football, Bancey is now fit and ready to grace the green turf once more and has sent out his availability to all clubs interested in taking a punt on him.

Seidu Bancey has not played active football since the 2017/2018 season where he played for Tunisian side Esperance Zarzis in the Tunisian topflight before a knee injury curtailed his stay at the Tunisian side.

In an interview with OMY TV, the club less Bancey says he is now fit and ready to play for any interested club including his former side Asante Kotoko.

“After terminating my contract with ES Zarzis in Tunisia I’m now back to Ghana. I picked up a knee injury but I’m full fit now and ready for any local team. Even if it’s Kotoko I’m ready to play for the team again. “

“Despite me terminating my contract with the North African side if I have another opportunity to sign in a different team there I will accept it,” he concluded.

Seidu Bancey played for Ebusua Dwarfs and Asante Kotoko scoring a combine total of 53 goals in 102 appearances before leaving Kotoko for Egyptian side Smouha SC in the 2014/2015 season.

The 30 year old was also part of the Black Stars B team that finished runners up in the third edition of the CHAN tournament under coach Maxwell Konadu.

Mariano Barreto trains with Asante Kotoko for the first time