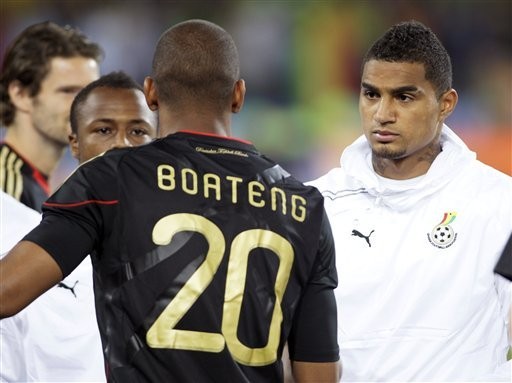 Germany and Bayern Munich defender, Jerome Boateng has said playing against his big brother, Kevin Prince Boateng at the 2010 World Cup, made their parents incredibly happy.

The two brothers made history in the world stage by becoming the first brothers to play against each other.

The pair also faced each other during the 2014 Mundial in Brazil.

And according to the former Manchester City defender, he was nervous ahead of the game but their parents we super happy to see them play against each other.

“There was a lot of pressure on both of us, including the family. I was super nervous,” Jerome revealed in an Instagram chat with his brother.

“Our parents watched the game and were just incredibly proud of us.

“I also slept very little and hoped not to make a mistake because everyone was looking at us. It was one of the games with the most pressure,” he added.

Kevin-Prince Boateng and Jérôme Boateng share the same father but have different mothers.