‘No one will succeed at AshantiGold with current technical director’: Sacked AshantiGold coach Ernest Thompson 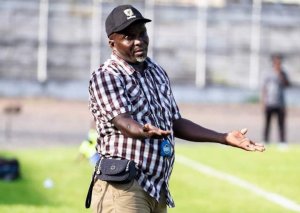 Ernest Thompson was appointed in September on a 2-year deal to replace interim trainer and ex-Ghana international, Thomas Duah.

Thompson will however be relieved of his position just two months into his appointment by the Miners.

Agreements have been reached by both parties over the termination of the contract as well as the severance package.

Thompson, who has picked four points from three matches has fingered Ricardo da Rocha for creating division between the technical team and the club’s top hierarchy which believes led to his sack.

The former Ebusua coach Dwarfs has warned that no coach will succeed at AshantiGold as long as the Brazilian remains the Technical Director.

“That man called [Ricardo] da Rocha, the Brazilian at AshantiGold, if he doesn’t leave there no coach will succeed there.

“My basis for saying that is, when you go there, he that has no qualification or whatsoever and not fit to coach in the Ghana premier league is your [AshantiGold] Technical Director.

“Secondly he will pretend he is fine with you, he will smile, laugh with you, eat with you, drink and whatever with you.

“But behind, he sends wrong signals to the president of the club.

“Because when we train we select and decide who should be in the team.

“When I present the squad to the president, the president goes behind to ask him as a technical director to come up with his list and then he will intentionally send a different list to show that we weren’t united or we weren’t taking instructions from him.

“So I have told Obuasi folks to be careful of that man because if he still remains at AshantiGold, the club will never progress, he is not a good man, he doesn’t speak the truth.” Ernest Thompson told Happy fm.

AshantiGold beat Techiman Eleven Wonders 1-0 in the season opener before playing out a 1-1 draw a Karela United in week two.

The Miners were beaten 2-0 at the Baba Yara Stadium by red hot King Faisal in week three. AshantiGold have their week four clash at home to Hearts of Oak with Ricardo da Rocha taking interim charge.

We will win the World Cup: Defiant Mancini insists after missing out on an automatic qualification spot in Qatar