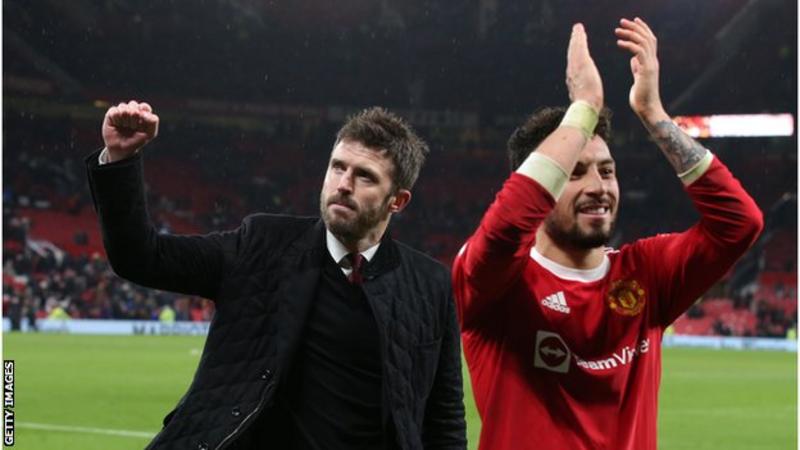 Michael Carrick says he is leaving Manchester United after the end of his spell as caretaker manager.

Carrick, in charge for three matches, announced his decision after United’s 3:2 win over Arsenal on Thursday.

“After a lot of thought and deliberation, I have decided that now is the right time for me to leave,” said Carrick.

Ralf Rangnick has been appointed interim manager until the end of the season.

Carrick, a five-time Premier League winner during 12 years as a player at United, took over as caretaker coach following Ole Gunnar Solskjaer’s departure from the club.

He took charge of the 2-0 Champions League away win to Villarreal on 23 November before dropping Cristiano Ronaldo to the substitutes bench for the 1-1 draw at Chelsea last Sunday.

Carrick announced his decision to leave minutes after the Arsenal victory which lifted United into seventh spot in the table.

“It wasn’t easy telling the players,” he added. “In some ways you feel like you’re leaving them in the lurch but sometimes you have to do what’s right.

“I’ve loved working with them – they are a terrific group of players.”

Carrick, who also helped United win the Champions League in 2008, was first-team coach under Solskjaer.

The 40-year-old said that loyalty to his former Red Devils team-mate was a “little bit of a factor” behind his decision to leave.

“It’s not been an easy decision to make but I feel it’s the right one,” Carrick added.

“It’s 100% my decision. Over the last week I was conscious I respected the club and the manager coming in. I thought it was the right thing to do for the club and for Ralf. I’m quite happy with that.

“The loyalty to Ole is a little bit of a factor but there were a lot of things that came into my decision.”

Speaking to BBC Sport, Carrick added: “I was conscious of making my decision before any real conversations with Ralf. I wanted to be clear cut. It was nothing personal at all.”

United midfielder Bruno Fernandes, speaking after the Arsenal win, said Carrick could become a “top manager” in the future if he pursued a career in management.

John Murtough, United’s football director, said Carrick was leaving after 15 years of “exceptional service” to the club as a player and a coach.

“He will always be known as one of the finest midfielders in the history of Manchester United,” he added.