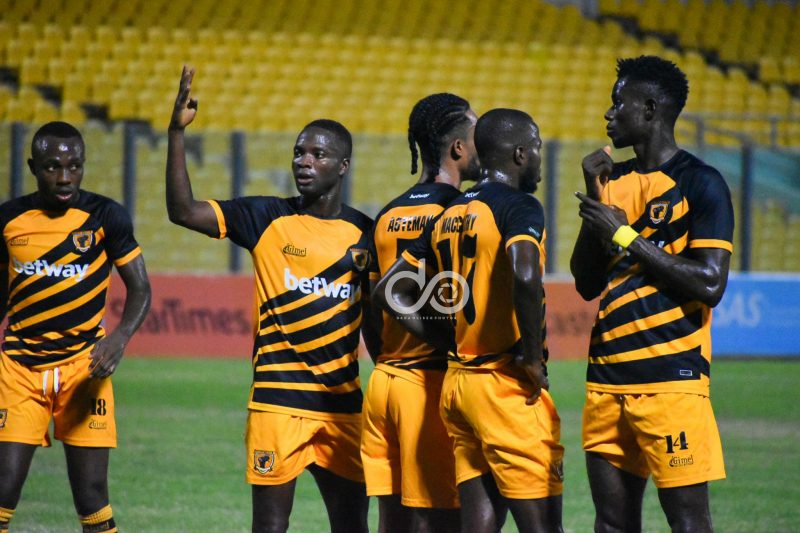 Four-time Ghana Premier League champions AshantiGold have been demoted to the country’s third-tier after being found guilty of match manipulation in a massive earthquake ruling which will ruffle feathers in the West African nation.

In a massive decision announced on Monday, the miners have been relegated to the country’s Division two after the club was found guilty of match manipulation in their league match against Inter Allies last year.

The Ghana FA has been under immense pressure to deliver judgement on the match fixing suspicion that rocked the Ghana Premier League in July 2021.

The Disciplinary Committee has ruled that AshantiGold will suffer punishment after being found guilty of match-manipulation.

That at the end of the 2021/22 Ghana Premier League season, Ashantigold SC shall be demoted to the Division Two League in accordance with Article 6(3)(h) of the GFA Disciplinary Code 2019,” part of the ruling read.

Inter Allies defender Hashim Musah climbed off the bench to score two deliberate own goals in an attempt to foil an alleged match-fixing plot – and insisted his team congratulated him for spoiling the ‘pre-agreed’ scoreline during a league match against AshantiGold last year.

Musah came on the pitch for Eleven Is To One with the score at 5-0 and scored two own goals in the final 12 minutes before being subbed off as the match ended 7-0 on the final day of the season on July 11.

The defender confessed to the media that he intentionally score the own goal – which went viral on social media in a move to ruin what he believed was a pre-arranged result for betting reasons.

The match between AshantiGold and Inter Allies, which produced a cricket score of 7-0 in favour of the Miners, is being investigated by authorities over match-fixing allegations.

Hashim scored the six and seven goals against his own club and admitted that he scored those goals to destroy the planned bet on a specific outcome of the last game of the season with his club already relegated.

“I heard it in our hotel that a bet had been made for a correct scoreline of 5-1 against my club Inter Allies. I promised my coach that if he allows me to play from the bench, I will spoil the bet. And after the game, my team congratulated me” Musah told Kumasi FM.

“I decided to spoil that bet because I don’t condone betting.” the centre back stressed.

His justification drew mixed reactions. While receiving praise for not condoning match-fixing, he has been criticized by others for deliberately putting the ball in his own net, leading to Ghana football being ridiculed on the global stage.

Officials and players of both teams have been took their turns in assisting the police to investigate the shameful conduct with authorities relying heavily on the claims of the defender.

In 2007, Nania FC, Okwahu United, Great Mariners FC and Tudu Mighty Jets were demoted to the fourth division after they were found guilty of match-fixing.

Nania and Mariners were level on points in their group and needed to win their final matches to qualify for the country’s top league.

However, upon successful appeals, the four clubs maintained their second-tier status but severed one season bans.

Hashim Musah: This is why Former Inter Allies defender was banned for only six months for role in Match-fixing scandal