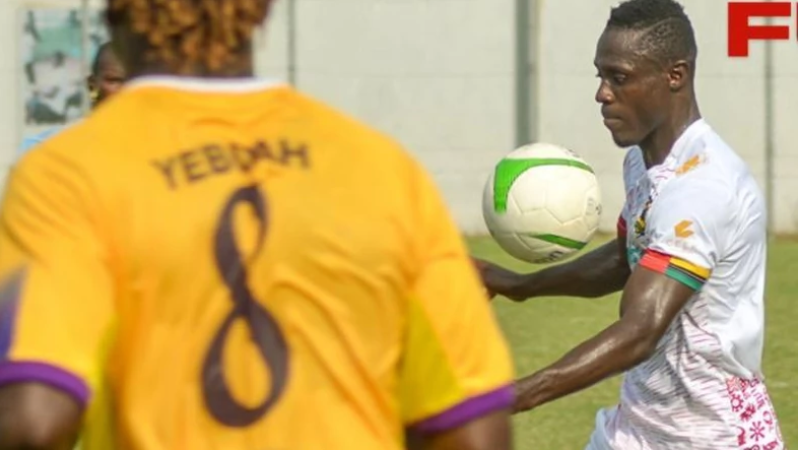 Kwame Opoku registered the opener for the visitors, but Abass Mohammed scored a late minute spot-kick to deny his former side from taking all the three points for the day.

Kwasi Donsu and Eric Kwakwa raided the Kotoko goal area, yet their attempts went over the goal post for a goal kick in the early minutes of the game.about:blank

A cross from Latif Anabilla was well connected by a Kotoko striker who was lurking around the Medeama goal area, but Eric Ofori Antwi pulled off a good save to prevent the Kumasi from taking the lead.

Rashid Nortey struck a non-drop ball after receiving a pass from Kwadwo Asamoah and goalkeeper Razak Abalora was completely beaten to the ball, but it missed the goal post.

Back from the recess, Medeama made a move which almost resulted in an infringement inside the 18-yard box when a Kotoko player handled the ball, but the referee who spotted it clearly whistled for a freekick because it happened on the edge of the box.

Kwame Poku afterwards scored am masterstroke bicycle kick, but the referee had earlier whistled for an infringement, so the goal didn’t stand.

Imoro Ibrahim incisive inswing that found William Opoku Mensah was headed over the crossbar after beating off a challenge from two Medeama defenders.

Kwame Poku took on his markers but his drive went wide to give Medeama a sigh of relief.

Kwadwo Asamoah responded for the hosts when he beautifully weaved his way through Kotoko defence and beat two players in the process, but he decided to nutmeg Abalora, who closed his legs to stop the ball from entering the net in the 70th minute.

The game was fairly balanced until Kotoko finally broke the deadlock when a through pass from skipper for the Porcupine Warriors Emmanuel Gyamfi was connected home by Kwame Opoku to register his third goal of the season.

The Porcupine Warriors were on their way to earning their first away win at Medeama in four visits, but a late minute penalty which was well converted by Abass Mohammed denied them the win.

Habib Mohammed handled the ball in the 18-yard box and the referee whistled for a penalty for the hosts in injury time and Abass Mohammed who came in as a second-half substituted stepped up for the spot-kick and slotted it home for the equaliser.

Kotoko have failed to beat Medeama at Tarkwa in their last 4 visits in the league (D3,L1) & including the truncated 2019-2020 season it would be 5 without a win at Tarkwa.