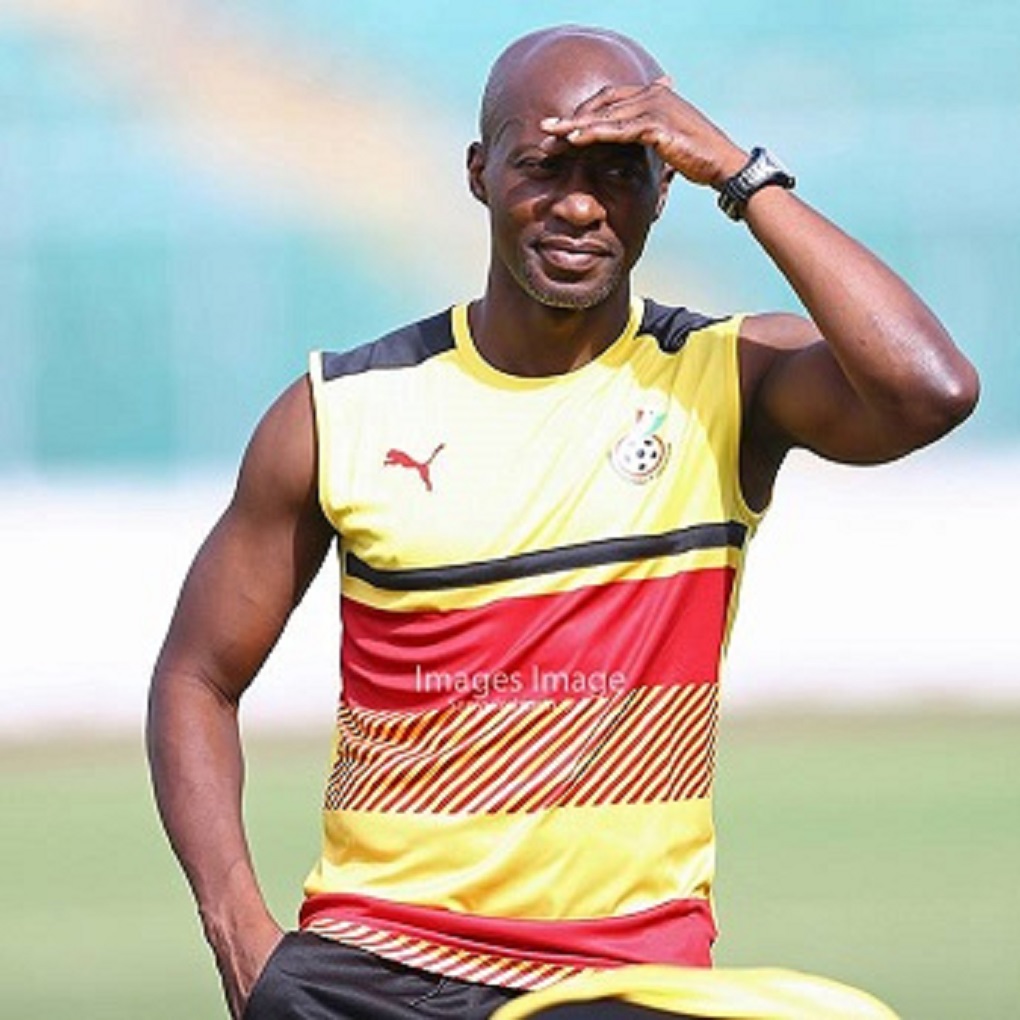 With a careful assessment of how players have fared in the league since the 1993/1994 season (the maiden season of the Ghana Premier League), Coach Ibrahim Tanko has named his all-star team in an exclusive interview with Pulse Ghana.

With the exception of Kofi Deblah and Shilla Illiasu the rest of the nine players in his team had stints with Hearts of Oak.

Notable among the list were the Hearts of Oak attacking quartet of Ishmael Addo, Emmanuel Osei Kuffour, Charles Taylor and Dong Bortey who dominated the Ghana Premier League for many years.

He is one of the safest pair of hands the country has ever produced. He is a goalkeeper of great elasticity in post.

Sammy Adjei was very instrument as Hearts of Oak won the CAF Champions League in 2000. One of his best games in between the sticks was at Al Ahly in a one-all draw at Cairo. It was a game between Sammy Adjei and Al Ahly, yet he made several point-blank saves to salvage a crucial one point for the Phobians.

He was at his best throughout the Champions League campaign and they defeated Esperance in both the home and the away fixtures to become Africa champions for the first time. Hearts of Oak of Oak who had won the League and the FA Cup clinched a historic treble.

Sammy Adjei also became an integral part of the national team during the period.

Osofo as he was affectionately called by his playing mate, marshalled the left full-back position very well, despite being a right-footed player.

He combined both attacking and tracking back very effectively to offer more in attack as well as quickly drawing back to provide stability to the defence.

Amankwah Mieku won six league titles with Hearts of Oak and he was instrumental as the Phobians emerged as African Champions in 2000 in a year they won every single title they competed for.

Mireku again captained Hearts of Oak as they won the CAF Confederations Cup against their bitterest rivals Asante Kotoko in January 2005.

The former Hearts of Oak skipper’s performance and consistency earned him a call-up to the Black Stars and he became a key member of the team from 2000 to 2004.

Shilla Illiasu had a good reading of the ball and very difficult to beat, providing cover for the goalkeeper.

He had a successful career with King Faisal and he rose to prominence after he joined Asante Kotoko in 2005.

Illiasu helped Asante Kotoko to win the Ghana Premier League in 2005 and after establishing himself as a solid centre bak on the domestic scene he was handed an opportunity to join Black Stars.

In the 2006 FIFA World Cup whiles with the Porcupine Warriors he emerged as one of the stars of the tournament, combining very well with John Mensah as Ghana earned the results against Czech Republic and the USA, before losing in the quarter-finals against Brazil.

Rambo, as he was nicknamed, was a solid centre back and very difficult one to beat.

Agyemang Duah won the Ghana Premier League title with AshGold and Hearts of Oak and before that he was part of the Kotoko team that won the 1993 league.

Agyemang Duah also played in three CAF Champions League final. He was at the losing end at Kotoko in 1993 and AshGold in 1997, but he finally clinched the trophy with Hearts of Oak in 2000.

Agyemang Duah was a regular member of the Black Stars in his prime in the Ghana Premier League, representing Ghana in the 1994 Africa Cup of Nations (AFCON).

In midfield, Ibrahim Tanko gave the nod to four ex-Hearts of Oak players: he paired Adjah Tetteh and Emmanuel Osei Kuffour in the central midfield, whereas he deployed Dong Bortey and Charles Taylor to the right and left midfield, respectively.

He was a workaholic midfielder for the Hearts of Oak. Tetteh was ball winner and his retention of the ball was superb.

Adjah Tetteh Tetteh’s presence always eased pressure on the centre backs by doing o a lot of interceptions in the heart of the midfield.

He joined Hearts of Oak from Dawu Youngsters and played a key role as the Phobians won the Ghanaian topflight league six times.

He played a crucial role as Hearts of Oak clinched a treble in 2000, winning the CAF Champions league, league and the FA Cup, before winning the Super Cup in 2001.

The central midfielder also won the CAF Confederations Cup with the Accra giants scoring the all-important late minute equalizer that threw the final into a penalty shootout against Asante Kotoko.

Charles Taylor was a delight to watch with his effective dribbles and runs. Many rates him as one of the best dribblers Ghana has produced in the past 20 years. He added goal scoring to his play emerging as joint GPL top scorer in 2002 with 18 goals.

After joining Hearts of Oak from Great Olympics, he won three Ghana Premier League titles, before moving to Kotoko in 2003. The mercurial midfielder helped the Kumasi giants to win their first Ghana Premier League in his debut season, following a controversial transfer which prolonged for some time before it went through for GHC 120,000 (Still a Ghanaian record for a transfer between two clubs on the domestic scene). He was part of the Hearts of Oak team that swept everything in 2000, winning the CAF Champions League, Ghana Premier League and the FA Cup, which was a historic treble.

Dong Bortey ‘the Serial killer’ was remarkable in the Ghana Premier League and the toast of most Hearts of Oak fans. He carved a niche for himself as a big-game player, especially his influence in Hearts games against their rivals Kotoko was second to none.

Bortey also had a short stint with Aduana Stars.

Emmanuel Osei Kuffour is arguably the greatest player in the Ghana Premier League history. He started playing in the GPL in the 1993/1994 with Dwarfs as a defender before he was converted into an attacking midfielder. He featured in the GPL until the 2007/2008 season when he won the league with Asante Kotoko, making him the longest-serving player in the professional league.

He won five league titles with Hearts of Oak and a league title with Asante Kotoko, making him one of the most decorated players in the GPL.

He had eyes for goals and he possessed the abiliy to torment the opposing goal area.

Kofi Deblah was a regular feature in the the Black Stars during his heydays at Goldfields now AshGold.

He is the greatest scorer in the history of the Ghana Premier League (GPL). Ishmael Addo was a striker who was the ball playing type, but he had a good vision at goal and his positioning was second to none in the opponents’ goal area.

He won the Ghana Premier League top scorer in 1999 after being promoted from the junior side, bagging 16 goals.

Addo registered 19 goals the following season and in 2001 he recorded 22 goals which is the highest goal tally in a single GPL season.

He has paid his dues at the national team level. In 1999 during the FIFA U-17 World Cup he emerged as the top scorer as Ghana placed third and he was also had the opportunity to play for the Black Stars, but, he failed to translate his devastating form at club level to the national team.

The Ghana Premier League all-time XI is a campaign by Pulse Ghana to settle on the finest players who have paid their dues to domestic football in the country since the inception of professional football on 19th December 1993.

Ghana Sports Historian and Statistician Thomas Freeman Yeboah in his research came up with about 50 players who have been outstanding in the Ghanaian topflight league from 1993 up to date.

The list was presented to Coaches, retired and current football administrators and journalists and other well-meaning sports enthusiasts to help the exercise.

They were, however, at liberty to include any player whom they consider worthy of a place in the team, though not captured in the pool of prospective players for the Ghana Premier League all-time

(1) Players who have excelled during the period from 19 December 1993 to date were considered.

(5) Silverware won by the players

(7) National team assignment for the player during this period.

It should be noted that the views of about ten renowned coaches, journalists, football administrators have been taken into consideration in our quest to establish the Ghana Premier League finest XI of all-time.