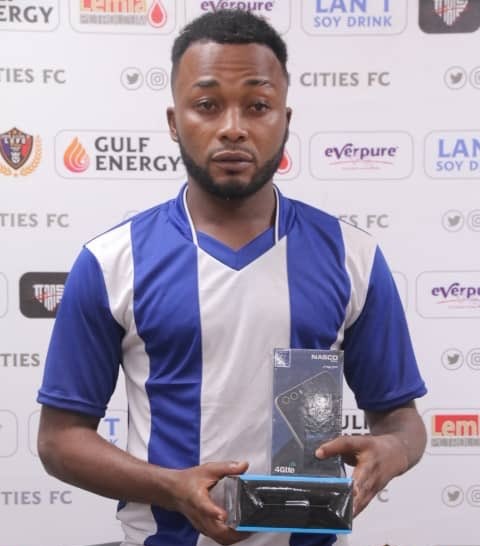 Accra Great Olympics captain, Gladson Awako has been named the Man of The Match award following their win over Legon Cities.

The ‘Dade’ lads hosted the Royals at the Accra Sports Stadium on Friday night in their matchday 2 fixture.

After picking up a point against Medeama SC in Tarkwa in their matchday 1 game, Olympics stunned Cities 3-0 to maintain their perfect start of the season.

The Dade boys dominated the first half and were eventually rewarded after Gladson Awako’s freekick was deflected into the net in the 44th minute.

Olympics goalkeeper, Agyare was barely troubled by the away side in the first half.

Maxwell Acquaye did not fail to convert from the spot after Olympics were awarded a penalty in the 51st minute to double the lead for the home side.

Samuel Abbey sealed the win for Olympics in the 83rd minute to hand Legon Cities their first loss of the season.

Olympics are on top of the league log with 4 points and will be hosted by Asante Kotoko in their matchday 3 at the Accra Sports Stadium.