Ghana qualify for AFCON after 1-1 draw with South Africa 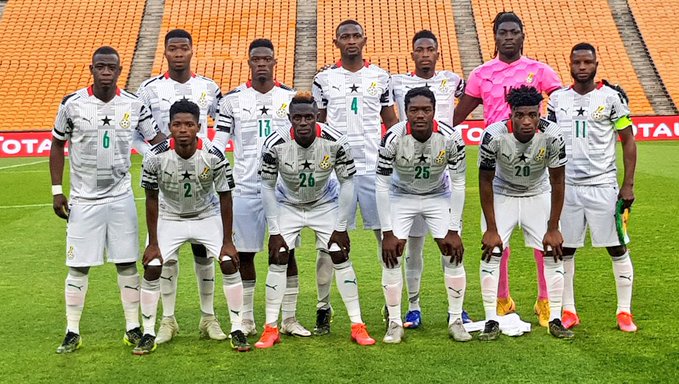 The Black Stars of Ghana have secured qualification to the 2022 Africa Cup of Nations to be hosted in  Cameroon after drawing 1-1 with the Bafana Bafana of South Africa.

After a goalless first half, Kudus Mohammed pulled off some magic and broke the deadlock in the game as his fine strike hit the post and beat Williams in the posts of South Africa.

The Ajax star ran onto a pass from the right at the start of the second half and beat the South African defence with a delightful touch which took him into the box.

His second touch was even better as his shot beat the keeper and went in off the post.

Prior to the goal, C.K Akonnor’s men was lacking creativity and were poor in every aspect of the game, with Percy Tau constantly tormenting Baba Rahman.

Thapelo Morena of South Africa came close twice in the first half but his efforts all could not find the back of the net as Bafana Bafana looked the hungrier of the two sides at the FNB Stadium in Johanesburg.

Ghana went back to sleep after Kudus had opened the scoresheet, with the team failing to create anything substantial.

The were left off the hook several times as the South Africans themselves failed to be incessive with their passes in the final third of the game.

Kumasi Asante Kotoko’s Razak Abalora came to the rescue of the Black Stars in the course the game, ensuring the team held on to the draw to secure a point.

The draw means the Black Stars of Ghana still sit on top of Group C with 10 points, followed by South Africa, Sudan and São Tomé and Príncipe.