Europa League: Check the African players on the brink of history in today’s final 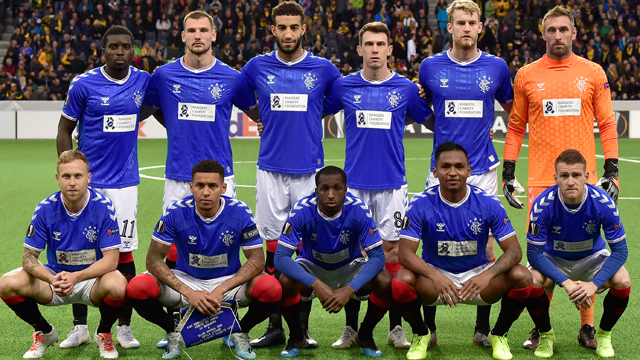 Rangers stand on the brink of glory in the Europa League, and five Africans are looking to create history with the Scottish giants.

Defenders Calvin Bassey and Leon Balogun and forwards Joe Aribo, Amad Diallo and Fashion Sakala could all be involved in Wednesday’s final against Eintracht Frankfurt.

Rangers saw off former European champions Borussia Dortmund and Red Star Belgrade in the knockout stages before overcoming RB Leipzig in the last four to set up a date with destiny.

Can either of the three Nigerians, the Ivorian or the Zambian be the man to end Rangers’ 50-year wait for a European trophy when they meet German side Eintracht in Seville?

Here, former Rangers and Scotland forward Steven Thompson assesses the impact the quintet have had on the Glasgow club’s bid for glory in Europe’s second-tier continental club competition.

Defender Bassey has started 12 of 16 games in the Europa League, either at left-back or centre-back. The 22-year-old, who is in his second season at Ibrox, made his Nigeria debut in March.

“This season, he’s made himself one of Rangers’ best players,” Thompson, 43, told BBC Sport Africa.

“His performances have been incredibly consistent. He has proven his versatility as well, playing some times at left-back and other times at centre-half where I actually think he looks more comfortable with his power, his pace, his composure on the ball and his strength.

“He has been such, such a big player this season, I’ve been so impressed. He’s matured so much I think he would probably be a lot of supporters’ pick for player of the season.

“The big issue for me is I think he’s been that good that I think there will be clubs undoubtedly looking at him because of his versatility, his athleticism and how consistent he has been.”

Centre-back Balogun has been a dependable defender since his move north from Wigan in 2020.

The 33-year-old has scored twice in the run to the final – in the group-stage win over Brondby and last-16 tie against Red Star Belgrade – but has found himself on the bench in recent knockout matches.

“Balogun has been in and out of the team this season, but he’s never ever let Rangers down,” Thompson said.

“More recently, we’ve been seeing Bassey in at centre-half and Borna Barisic at left-back now he’s rediscovered his form, so I’m not sure if Balogun will start the final.

“I would say it’d be more likely to be Connor Goldson and Bassey who are the centre-halves with Barisic left-back – but Balogun has had a very good season and has played over 30 games.”

Aribo joined Rangers from Charlton in 2019 and has become a key player, only missing one of their European outings in 2021-22.

“He started the season incredibly well and he’s a big fans’ favourite,” Thompson said of the 25-year-old Nigerian.

“He’s very good on the ball; creative, strong, dynamic. He’s put in some huge performances in Europe and been asked to play a number of positions.

“He’s been almost an ever-present in that Rangers midfield. He is such a threat and has had big moments in the Europa League run.

“There’s no doubt that he contributes a lot to the side. I do think he needs to up his numbers in terms of goals and assists.”

Zambian striker Sakala is still settling in Scotland following his switch from Belgian side KV Oostende at the end of last season.

He has chipped in with nine league goals – including a hat-trick at Motherwell and an equaliser in this month’s Old Firm derby at Celtic – but the 25-year-old has mostly been used as a substitute in Europe.

However, injuries to Alfredo Morelos and Kemar Roofe have seen him rise up the pecking order.

“He is very, very raw, has got incredible pace, and is very, very direct. The big question mark is sometimes the final thing he does – but that comes with playing more games and gaining more experience.

In the club’s first European final since 2008, when Rangers were beaten by Zenit St Petersburg in the Uefa Cup final, Bassey and company are looking to emulate the side which lifted the European Cup Winners’ Cup in 1971-72.

A win over Eintracht offers the added bonus of direct entry into next season’s Champions League group stage – something Rangers last achieved in 2010.

“This team has an opportunity to immortalise themselves in Rangers history,” Thompson said.

“It’s not very often Scottish teams reach European finals, and it’s been a long time since a team’s won one [Aberdeen in the Cup Winners’ Cup in 1983].

“So it’s just such an incredibly huge game for the club and for the players. They would never have dreamt that they would be in this position at the start of this campaign but they’ve grown with confidence.

“There’s a real togetherness about this Rangers team. If they were to do it, that’s them with an indelible link in the history of the club.”