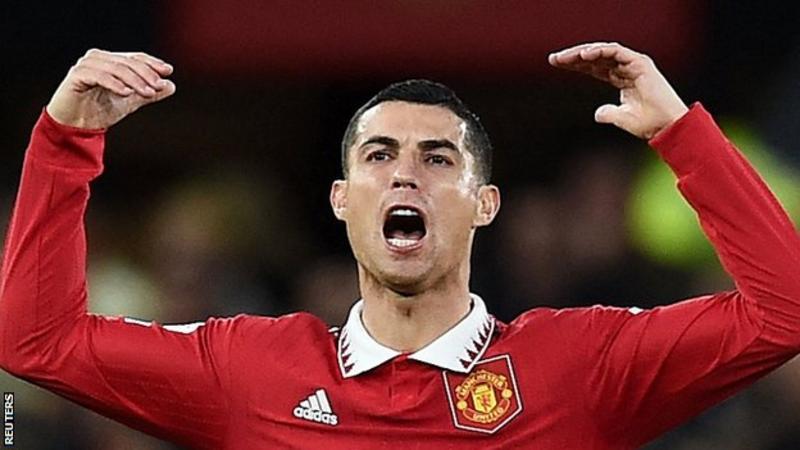 Manchester United forward Cristiano Ronaldo says he feels “betrayed” by the club, does not respect manager Erik ten Hag and is being forced out.

Ronaldo, 37, promised in August he would give his version of life at Old Trafford after failing to secure a move to a club playing in the Champions League, as he had hoped.

He has now spoken out in an interview with Piers Morgan for TalkTV.

United have been asked for a response to the Portugal international’s claims.

In extracts from the wide-ranging interview – published in the Sun, Ronaldo said:

The interview will be shown over two nights on Wednesday and Thursday.

Asked by Morgan if United’s hierarchy were trying to force him out, Ronaldo said: “Yes, not only the coach, but another two or three guys around the club. I felt betrayed.”

Pushed as to whether senior club executives were trying to oust him, he added: “People should listen to the truth. Yes, I felt betrayed and I felt like some people don’t want me here, not only this year but last year too.”

The Red Devils, who beat Fulham 2-1 on Sunday are fifth in the Premier League in Ten Hag’s first season as manager.

Ronaldo has not played because of an unspecified illness since he captained United in their 3-1 defeat at Aston Villa on 6 November.

He was dropped for the Premier League against Chelsea last month by Ten Hag after refusing to come on as a substitute against Tottenham three days earlier.

Ronaldo also spoke about the loss of his baby son in April and how touched he was by a tribute paid to him by Liverpool fans at a game against United at Anfield in the days afterwards.

The whole interview is 90 minutes long but Morgan has written a version for the Sun in which it is clear the contempt Ronaldo has for how he has found United since he returned to the club amid huge fanfare in August 2021.

“I think the fans should know the truth,” he said. “I want the best for the club. This is why I come to Manchester United.”

Ronaldo said he had seen “no evolution” at the club since former manager Sir Alex Ferguson retired in 2013.

“Nothing had changed,” he said. “I love Manchester United. I love the fans, they’re always on my side. But if they want to do it different… they have to change many, many things.”

Ronaldo said his view of the club was shared by Ferguson, who was pivotal in his return to Old Trafford from Juventus when it appeared he might join Manchester City.

“He knows better than anybody that the club is not on the path they deserve to be,” added Ronaldo.

“He knows. Everyone knows. The people who don’t see that… it’s because they don’t want to see; they are blind.”

Ronaldo’s former team-mate Ole Gunnar Solskjaer was United manager when the Portuguese returned to the club before he was succeeded by Ralf Rangnick and then Ten Hag.

Rangnick left his role as head of sports and development at Lokomotiv Moscow to take up the job. He had previously built his reputation during his time in Germany, with Liverpool boss Jurgen Klopp and former Chelsea manager Thomas Tuchel speaking highly about their compatriot.

On Rangnick, Ronaldo said: “If you’re not even a coach, how are you going to be the boss of Manchester United? I’d never even heard of him.”

Ronaldo also responded to criticism from former United team-mate Wayne Rooney about his behaviour this season.

“I don’t know why he criticises me so badly… probably because he finished his career and I’m still playing at a high level,” said Ronaldo.

“I’m not going to say that I’m looking better than him. Which is true…”