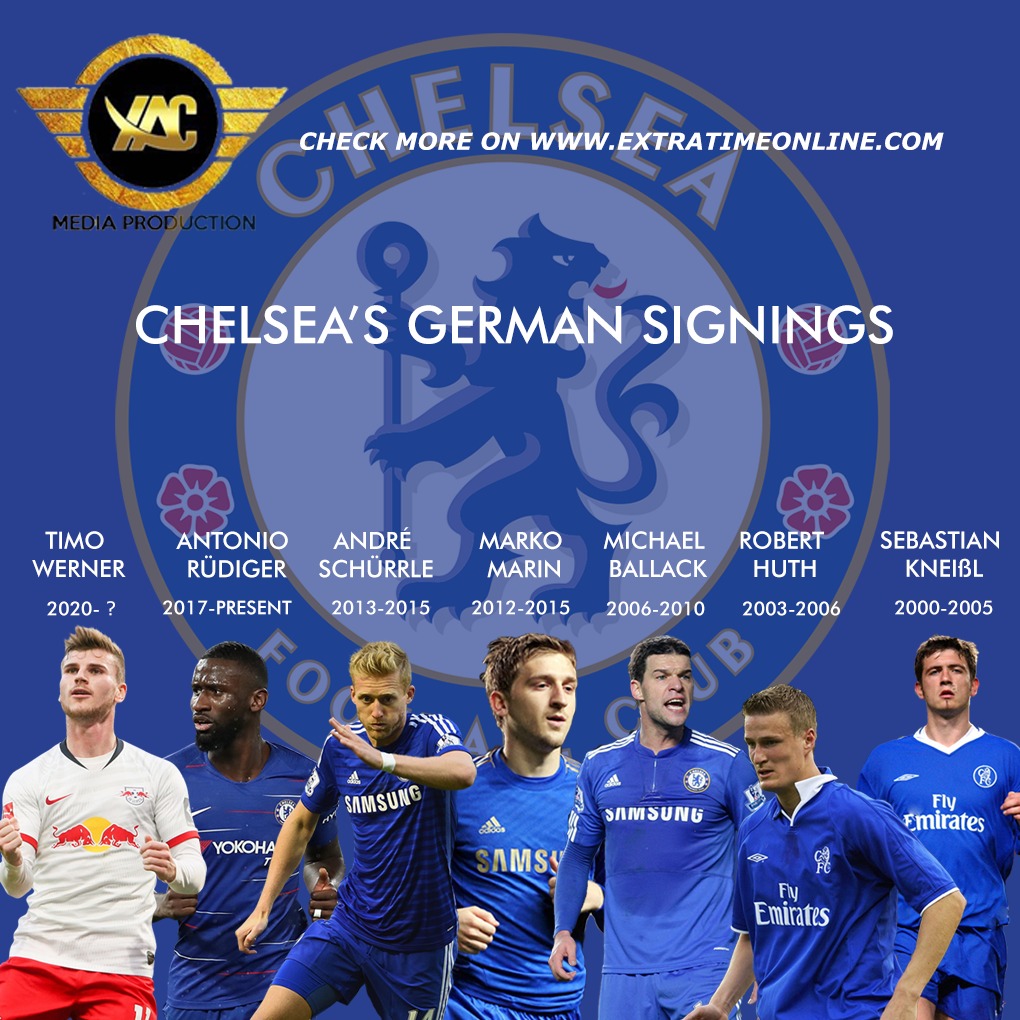 Throughout the Blues’ 115-year history, they have best players from around the world wear their jersey. Today, Chelsea completed the signing of German international Timo Werner. He becomes the 7th German international to play for the London club since 2000. Let’s take a look at how his predecessors fared at the club:

Sebastian Kneißl (2000 – 2005)
Chelsea signed Kneißl in July 2000 from Eintracht Frankfurt’s youth set up, Kneißl came with a big reputation, which was further enhanced by his occasional wonderkid performances on Championship Manager 2000/01.

He spent five years in west London – in the same reserve side as Carlton Cole – never once making it onto the pitch for the senior team. After poor loan spells at Dundee and Westerlo, he was released to SV Wacker Burghausen in his native Germany.

Robert Huth (2003 – 2006)
Huth debuted as a 17-year-old at Chelsea. He managed 63 games for Chelsea during a transitional period in the clubs history, as he was there during the Abramovich takeover.

A very capable centre-back, Huth managed enough appearances between 2004 and 2006 to collect two Premier League winners’ medals, despite Chelsea having that legendary partnership of John Terry and Ricardo Carvalho. He is, however, much better remembered for being a key member of Leicester’s historic title-winning team of 2015/16, coming after a solid career at Middlesbrough and Stoke.

Michael Ballack (2006 – 2010)
One of the greatest free transfers in the history of the sport, Michael Ballack took Chelsea up a level when he joined from Bayern Munich in 2006. Among the finest players of his generation, Ballack was the complete midfielder who improved the play of everyone around him, including a certain Frank Lampard.

Ballack was tasked with helping an ageing Claude Makélélé’s transition out of the team, and without the German, there’s no telling what could have happened to that midfield.

Ballack ended his Chelsea career with 1 Premier League title, 2 FA cups, 1 League Cup and a community shield to show for his 167 games for Chelsea.

Marko Marin (2012 – 2015)
There was a time when Marko Marin was one of the most exciting young players in the world – even dubbed ‘the German Messi’. Then he signed for Chelsea.

The £8m fee was seen as a bargain at the time, but it soon became apparent why Werder Bremen accepted such a low offer.

Marin never got going, looked out of his depth, and spent three of the four years he was contracted to Chelsea out on loan at an ever-decreasing quality of club – Sevilla, Fiorentina, Anderlecht, Trabzonspor – before Olympiakos finally ended his nightmare. He currently plays for Al Ahli in Saudi Arabia

André Schürrle (2013 – 2015)
Schürrle was signed from Bayer Leverkusen in 2013 for €22m, during a rebuilding summer which also saw Willian arrive. Deployed out wide over Mohammed Salah and Kevin De Bruyne, he became a fan favourite during his maiden season at the Bridge.

After a great 2014 World Cup, in which he assisted the tournament-winning goal, his game time reduced as Chelsea won the league, and he was sold to Wolfsburg for €32m at the end of the January transfer window.

Antonio Rüdiger (2017 – Present)
Antonio Rudiger has been a firm favourite with Chelsea fans since the tall and athletic centre-back joined the Blues from Roma in the summer of 2017.

With his tough tackling approach and commanding presence in the air, the 26-year-old has been a mainstay in the Blues defence over the past two seasons while also contributing some big goals for the club. The towering defender is one of the first names on the Chelsea teamsheet.

Timo Werner (2020 – ?)
Werner became the youngest player ever to represent VfB Stuttgart, making his debut in 2013. He later became the club’s youngest ever goalscorer. He made over 100 appearances for Stuttgart before joining RB Leipzig in 2016 for a then-club record fee of €10 million.

Across his spell with the two clubs, Werner claimed the domestic records for being the youngest player to reach 50, 100, 150 and 200 appearances in the Bundesliga and is the youngest player to have scored two goals in a single top-flight match in Germany. Following four years at RB Leipzig, Werner agreed a deal to join english club Chelsea in June 2020, and he will officially join in July.

Werner was a prolific goalscorer at youth international level where he scored 34 goals in 48 appearances across the various age group levels. He made his senior debut for Germany in 2017 and in the same year helped his nation claim the 2017 FIFA Confederations Cup where his return of three goals earned him the tournament’s Golden Boot award.