Black Stars to resume training tomorrow ahead of Double-header Qualifiers 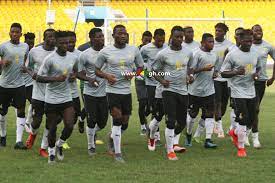 The Black Stars will resume training tomorrow, 30th August, 2021 at the McDan Sports Complex ahead of their double-header qualifiers against Ethiopia and South Africa.

Head Coach CK Akunor has called for support ahead of the two games as they prepare to kick-off their qualifying campaign at the Cape Coast Stadium.

Ghana who qualified for the World Cup in 2010 and 2014 missed out on the recent edition in Russia.

The Black Stars begin their qualifying campaign at Home to Ethiopia on Friday September 3rd and travel three days later to Johannesburg to face South Africa.

Ghana have been placed in Group G alongside Ethiopia, South Africa and Zimbabwe