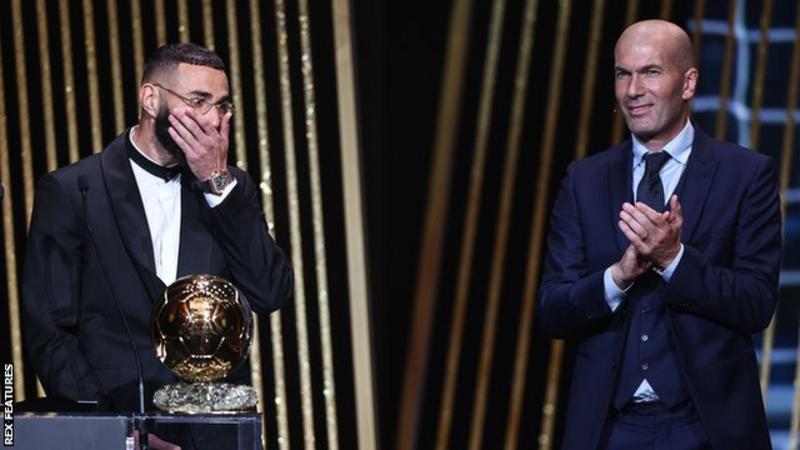 Real Madrid and France forward Karim Benzema has won the Ballon d’Or – awarded to the best footballer of the year – for the first time.

Lionel Messi (seven) and Cristiano Ronaldo (five) had won the award on 12 of the previous 13 occasions.

Bayern Munich’s Sadio Mane, who was at Liverpool in 2021-22, was second ahead of Manchester City’s Kevin de Bruyne.

Benzema is the first Frenchman to win the prestigious award since Zinedine Zidane in 1998. Zidane was at the event to present his countryman with the prize.

“This prize in front of me makes me really proud,” said Benzema. “When I was small, it was a childhood dream, I never gave up. Anything is possible.

“I’m really proud of my journey here. It wasn’t easy, it was a difficult time for my family as well.”

Benzema was the overwhelming favourite to win this year’s award.

His 44 goals included a hat-trick in 17 second-half minutes against Paris Saint-Germain in the Champions League, and another away to Chelsea in the quarter-final first leg.

He also scored three more goals over two legs of the semi-final against Manchester City.

The 34-year-old, who has been at Real Madrid since 2009, is expected to play a key role for France at the World Cup in Qatar which starts on 20 November.

The Ballon d’Or is voted for by 100 journalists from around the world.