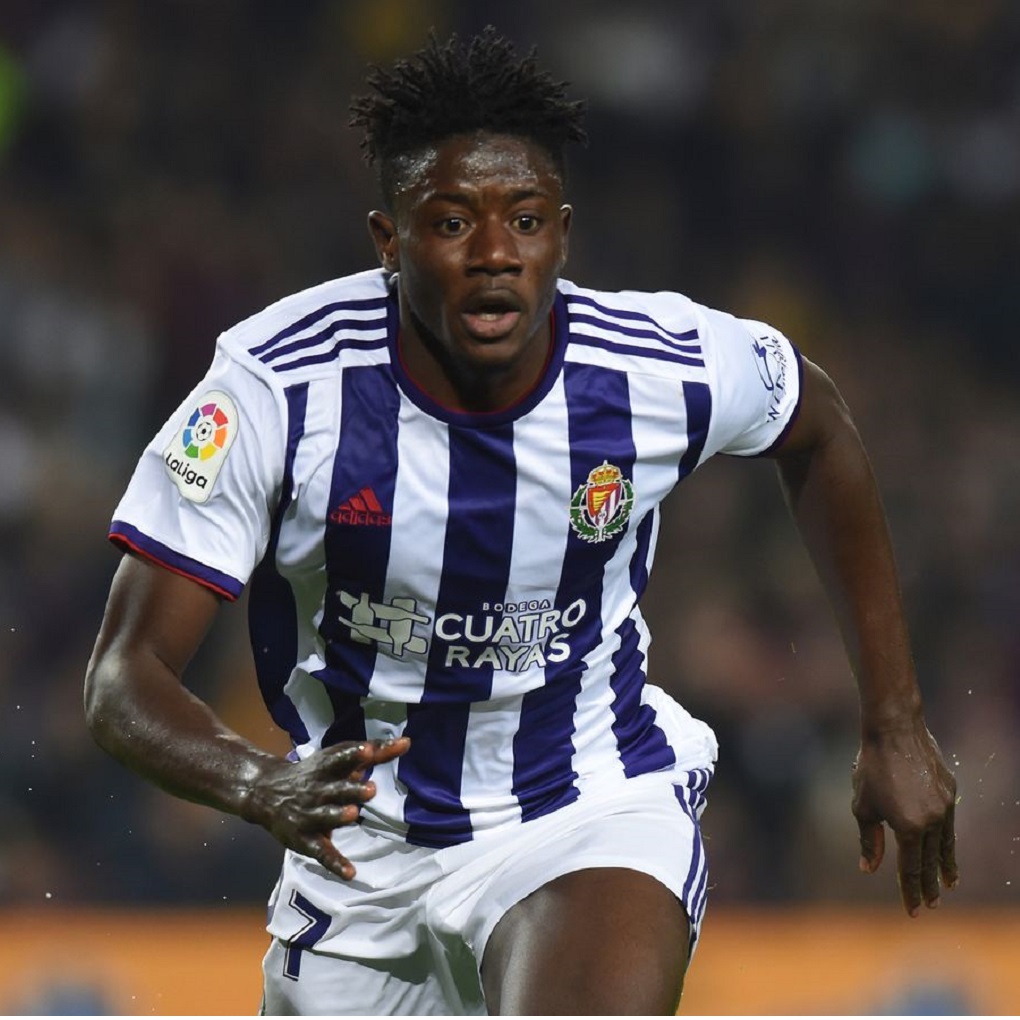 Real Madrid, Atletico and Manchester United are among the clubs in a ‘superfight’ for Real Valladolid’s promising 20-year-old defender Mohammed Salisu.

The centre back has been one of the surprise standout performers in La Liga this season and looks destined for a move up the footballing ladder this summer one way or another.

But who is he? Here’s what you need to know about the young Ghanaian…

Salisu, would you believe, actually started out at Barcelona.

However, rather than being another one who got away from La Masia, his ‘Barcelona’ was the team name of his side in Kumasi, Ghana.

After joining the African Talent Football Academy in the country’s capital of Ghana, Salisu was spotted by scouts from Spain.

As the centre back explains in a club video on YouTube, such was the surprise of the scouts visit, he didn’t have boots to play in the game and had to borrow an ill-fitting pair from one of the goalkeepers.

Dodgy footwear didn’t stop him from getting a move to Spain and joining Valladolid’s academy in 2017.

At 6’3, Salisu obviously cuts an intimidating presence in the backline and was dubbed ‘the wall of Valladolid’ by ​El Pais in October last year.

However, he is also as elegant as he is physical and was first spotted in Ghana for his technical attributes. He cites his own idol as Samuel Umtiti – Barcelona’s Cameroon-born World Cup winner.

Fran Castaño, Salisu’s coach back in Accra said: “I think he will be one of the best centre backs of African football and if everything goes well he could play in one of the 10 best teams in the world.”

While Real Valladolid sit 15th in La Liga, Sergio Gonzalez’s side actually have the sixth-best defensive record in the league and the best out of any team in bottom half. Most impressively, they have conceded fewer goals this campaign than ​Barcelona (25 to 28).

Salisu has missed just one game for Valladolid so far this season and has been a key figure in their defensive solidity.

No player has made more clearances in La Liga so far in 2019/20 (119), while he is also third for shots blocked overall and sixth for aerial challenges won by a defender.

He scored his first goal in the 2-0 win over Eibar, while his other standout result was earning a goalless draw with Atletico Madrid.

Not too shabby for a 20-year-old in his first season in the top flight then.

If the above all sounds good to you, then you are going to love the release clause. It’s just €12m (or £10m and change) for any would-be suitors, with his current contract running until 2022.

That is one-third of a Michael Keane.

Turned Down for What?

However, it seems not just anyone can turn Salisu’s head. According to ​AS, both Valencia and Getafe looked into signing the young defender, who took a pass on both moves.

According to the report, Salisu knows he ‘won’t lack offers’ in the upcoming summer.

While Manchester United and Atletico Madrid are among those linked this time (and Southampton and Newcastle have been mentioned in the past), ​Real Madrid have a massive edge in the race, as they look to hoover up as many of the next ​generation of superstars as possible.

Real Madrid maintain excellent relations with Valladolid in part due to the ‘friendship’ (as AS puts it) of the two club presidents: Florentino Perez and Ronaldo Nazario. Yes, him.

The Brazilian two-time Ballon d’Or winner – who spent four-and-a-half seasons in Madrid – became majority owner of the Pucelanos in September 2018.

Since then the connection between the clubs has been used to farm out rising stars Andriy Lunin, Javi Sanchez and Jorge de Frutos.