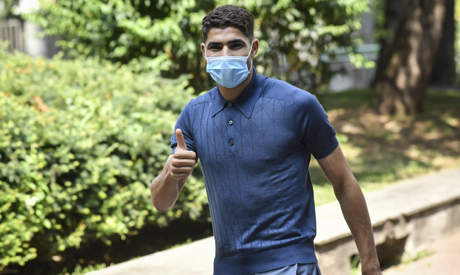 Inter Milan have completed the signing of Moroccan fullback Achraf Hakimi from Real Madrid on a five-year deal, the clubs announced on Thursday.

Hakimi rose through the ranks at Real Madrid after joining their academy in 2006.

The 21-year-old impressed while on loan at Borussia Dortmund in the Bundesliga over the last two seasons, with Italian media reporting Inter agreed a deal worth 40 million euros ($44.93 million) for the right back.

“The club wishes to thank Achraf for his many years of dedication, professionalism and exemplary conduct since he joined our academy in 2006 and wishes him all the very best in this new chapter,” Real said in a statement.

On Tuesday, Hakimi posted a farewell letter to Dortmund fans on social media, after making 73 appearances and scoring 12 goals during his time in Germany.

“The time has come to close a very beautiful stage in my life,” he wrote on Twitter https://twitter.com/AchrafHakimi/status/1277895409634086914. “After two wonderful years, I’m ready to leave this club that has given me so much joy.

“From the first moment, the care and attention by the club and the city has been amazing. Now I know that I was right to choose Dortmund as my home two years ago.”

Inter are third in Serie A behind leaders Juventus and Lazio, comfortably positioned to secure Champions League qualification.